First let me say Ms. Ciara did a very good job, picking out dishes, cleaning them and printing out our little Rudy Day tags for the table. She's picking up mom's nack and for the last couple years has asked to be "in charge" of the table.  She even washed dishes yesterday to get them all sparkling and clean again (they get a little dusty out of season..LOL). 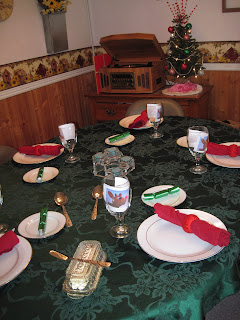 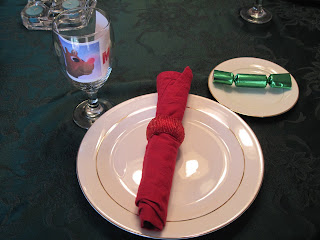 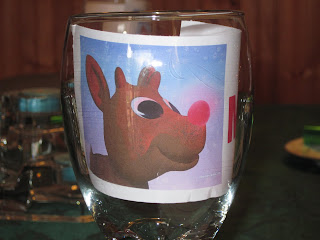 Her music choice came directly from my grandpa's record collection. It's Christmas with Colonel Sanders. Yes, there is such a thing!! Who would of known. When I brought all the records home and went through them years ago, this one gave me the biggest laugh. When she went to pull it out, we realized we'd never removed it last year from the record player. Since it's not nearly as long as a CD, we had to play it twice to get through dinner, but we had our usual laugh. 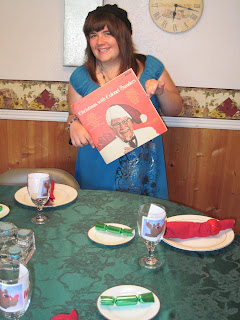 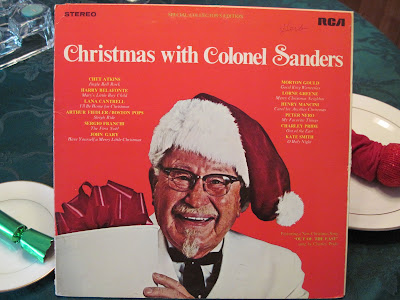 Our family photo is next. Gotta love my husband, he doesn't say a word and just plays along. Tammy, is game for a good dinner anytime, so she loves me for being the great cook I am and even accept me as a little Loony sometimes! Poor Mike is still in recovering from his surgery and was not feeling well. I have to give him kuddos for joining us when he didn't feel good. 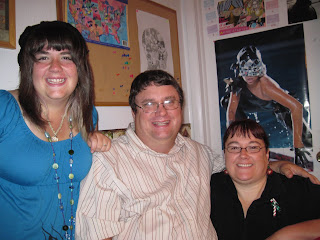 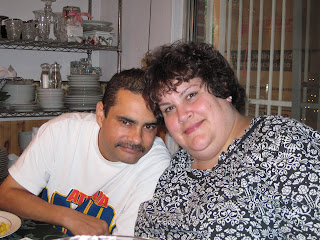 Last, but not least the food and recipes. The ham ended up being okay. Not great I thought, but good. Alot of people raved about the recipe, but some stated it had to much clove in it and I agree 100%. Therefor I'm going to decrease the clove amount when posting this now. I think with that change, it would be a great recipe and alternative to cooking it in the crockpot and opening up the oven. 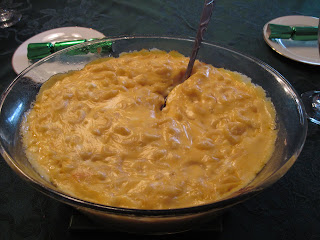 Cook Macaroni Al Denti (under cook just a tad) and drain. Grease a 2 ½ quart baking dish and set aside. In a large sauce pan, melt the butter. Stir in flour, salt and sugar until smooth. Gradually stir in the milk. Bring to a boil, stirring constantly for 2 minutes or until thickened. Reduce heat, stir in velveeta until melted. Stir in cottage cheese, sour cream, and cheddar. Pour macaroni in sauce pan and mix well. Pour entire mixture into baking dish and bake uncovered at 350 for 30 minutes. 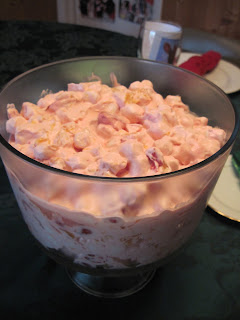 Mix all together and Enjoy! 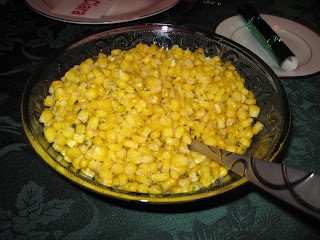 Herbed Corn
This recipe is served for our large family dinners. For smaller dinners, I half everything.
It’s meant for 10-12 servings if you use the entire recipe. 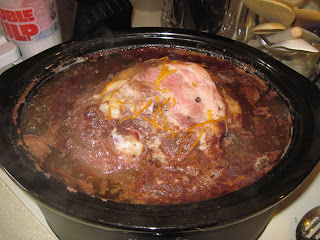 Place the ham in a slow cooker. Pour in apple cider until only about 2 inches of ham is above the surface. Pack the brown sugar on top of the ham, pressing into the cloves. This will get washed away in the next step but any that stays on is a bonus.

Pour the maple syrup over the ham. Season the apple cider with cinnamon, nutmeg, ginger, ground cloves and vanilla. Add the orange peel to the pot. Fill the slow cooker as full as you can with apple cider without going over the fill line. Cover and set to Low. Cook for 8 to 10 hours.  (I cooked  my 7 pounder for 8 hours, after it had been refrigerated overnight in the juice and it was overdone, I do not suggest 10 hours, I would cut it down to 6 if you have a choice)


Have a great day everyone and I hope you enjoy the recipes!
Posted by Michelle at 1:27 PM